There are several species of root-knot nematode (RKN) present throughout the U.S. and in parts of Canada, but five that are important on soybean. The southern RKN (Meloidogyne incognita) is the most widespread across the southern U.S. and thus, causes the greatest damage on soybean. The peanut RKN (Meloidogyne arenaria) is found in peanut producing states, the Javanese RKN (Meloidogyne javanica) is commonly found in the gulf states, the northern RKN (Meloidogyne hapla) which is also widespread but not normally considered to be economically important, and finally the guava RKN (M. enterlobii), which has been reported along the Atlantic cost in North and South Carolina.

Aboveground symptoms appear in small or large patches or “hot spots” of soybean plants with yellow, stunted plants. During the late season severe infections can result in plant death. Below ground symptoms, root galls are diagnostic for RKN because it is the only species that causes root galling. Galls form because of increases in cell size and number around the site of an RKN infection. Typically, root galls are visible within 30-35 days after emergence on susceptible varieties with severe nematode population densities, but their size at this stage is often small, similar or smaller than Rhizobium nodules. Rhizobium nodules are attached to the root and can be easily removed, while galls develop within the root and cannot be removed. Soybean cyst nematode (SCN) females and cyst are also attached to the root and smaller than rhizobium nodules. At early to mid-reproductive stages of growth root galls are often larger and coalesce together to form what appears to be an oversized root. As females die, the tissue around galls deteriorate and rot, thus galls are not as easy to recognize at harvest.

Foliar symptoms of RKN in soybeans including yellowing and death of leaves. Image: T. Faske.

Root-knot nematodes are often more numerous and problematic in fields with coarse textured soils (loamy sand, sandy loam and sand). RKN have a wide host range that include agronomic and weeds, but not all species of RKN have the same host range. For example, the peanut RKN will not reproduce on cotton, while the southern RKN will not reproduce on peanut. So, although crop rotation is limited, speciation of RKN can be an important consideration. With southern RKN, common rotation crops like cotton, corn, grain sorghum, and soybean are host and can maintain or sustain a population of RKN.

Each year RKN population densities in the soil are greatest shortly after harvest in the fall and lowest at planting in the spring. Fall soil samples are useful to predict RKN damage in the subsequent soybean crop and should be monitored every three to five years to evaluate changes in the types of plant-parasitic nematodes present and changes in population densities. 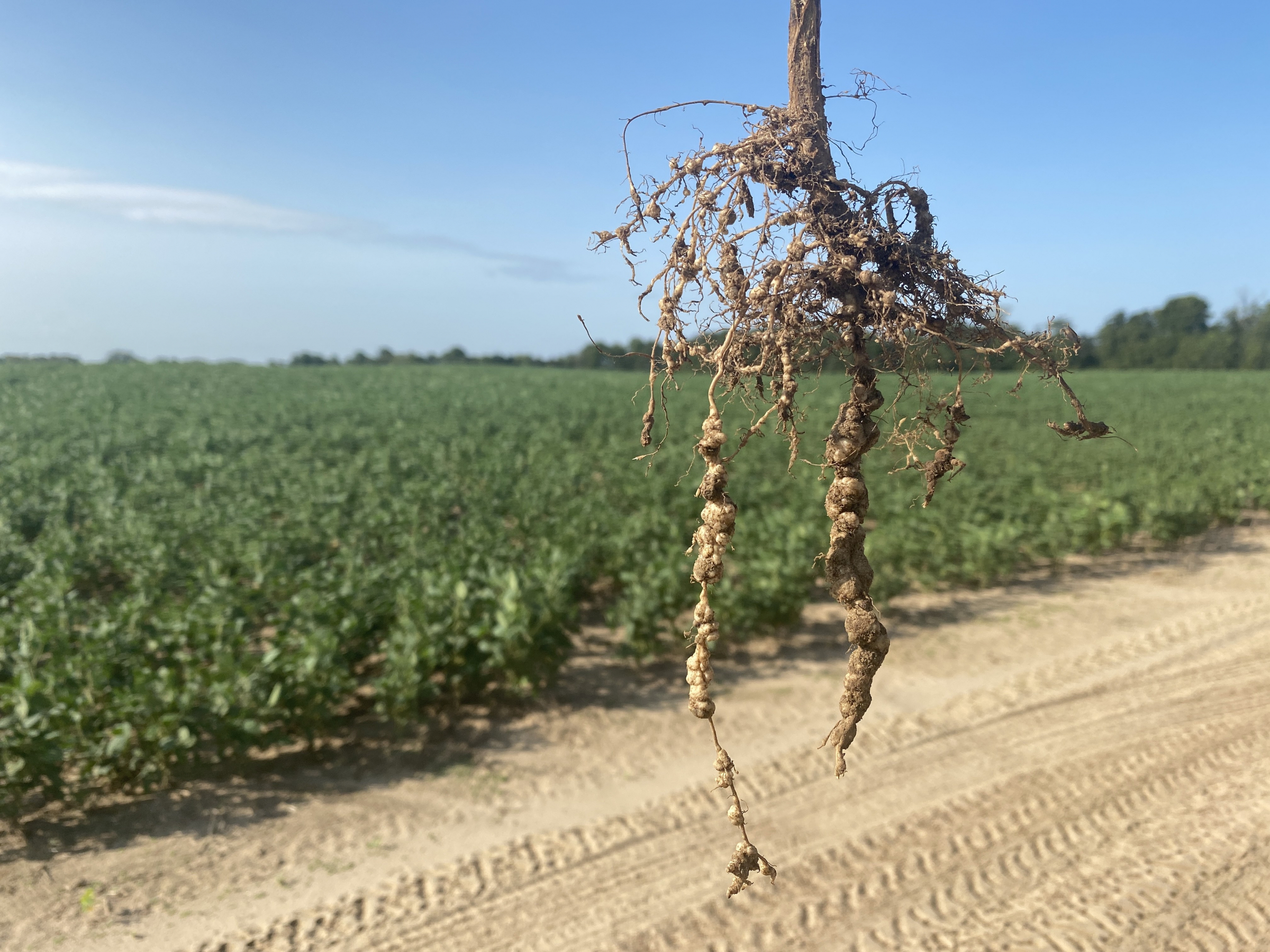 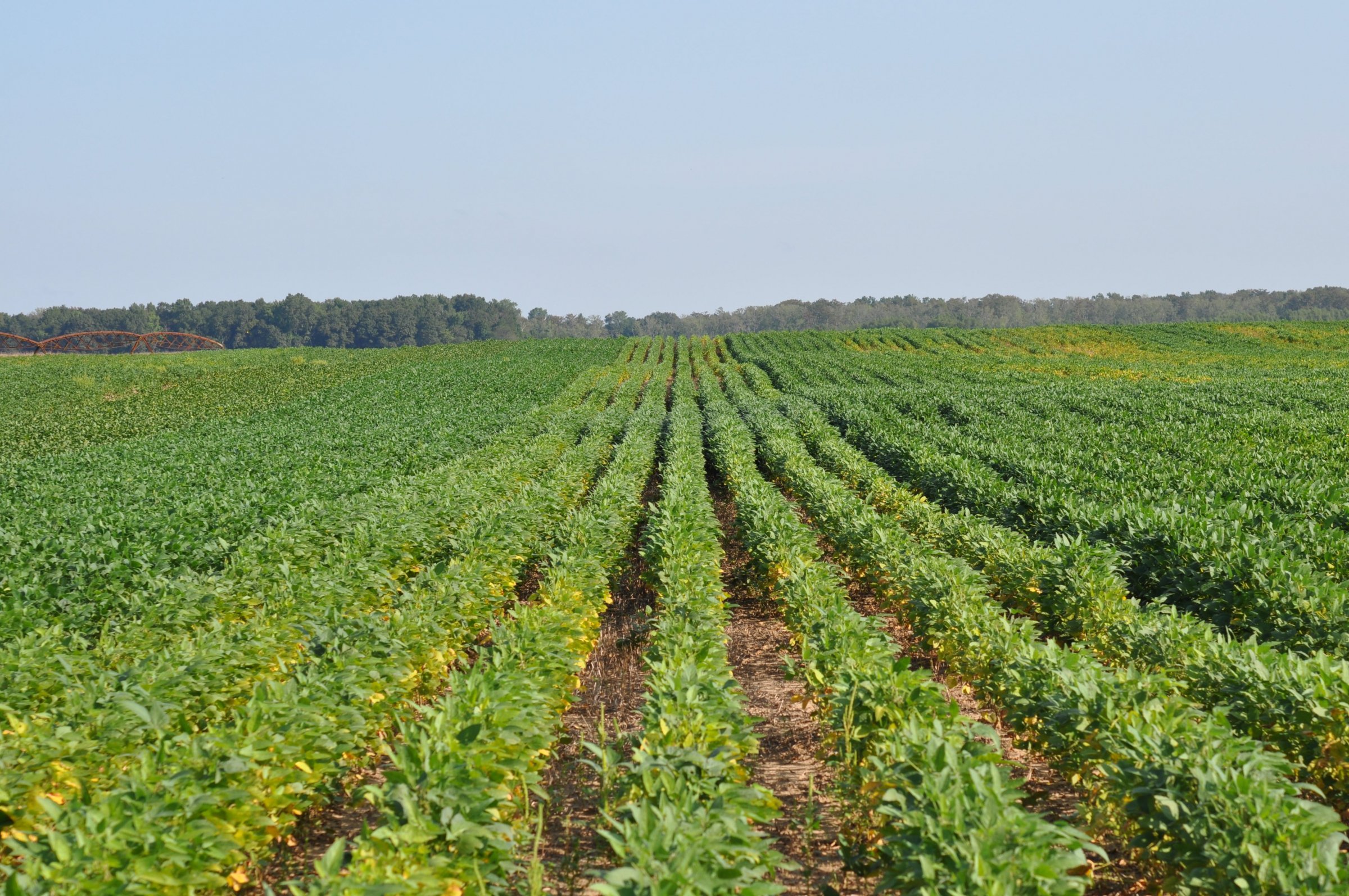 Strips of soybean varieties with an without resistance to root-knot nematode. 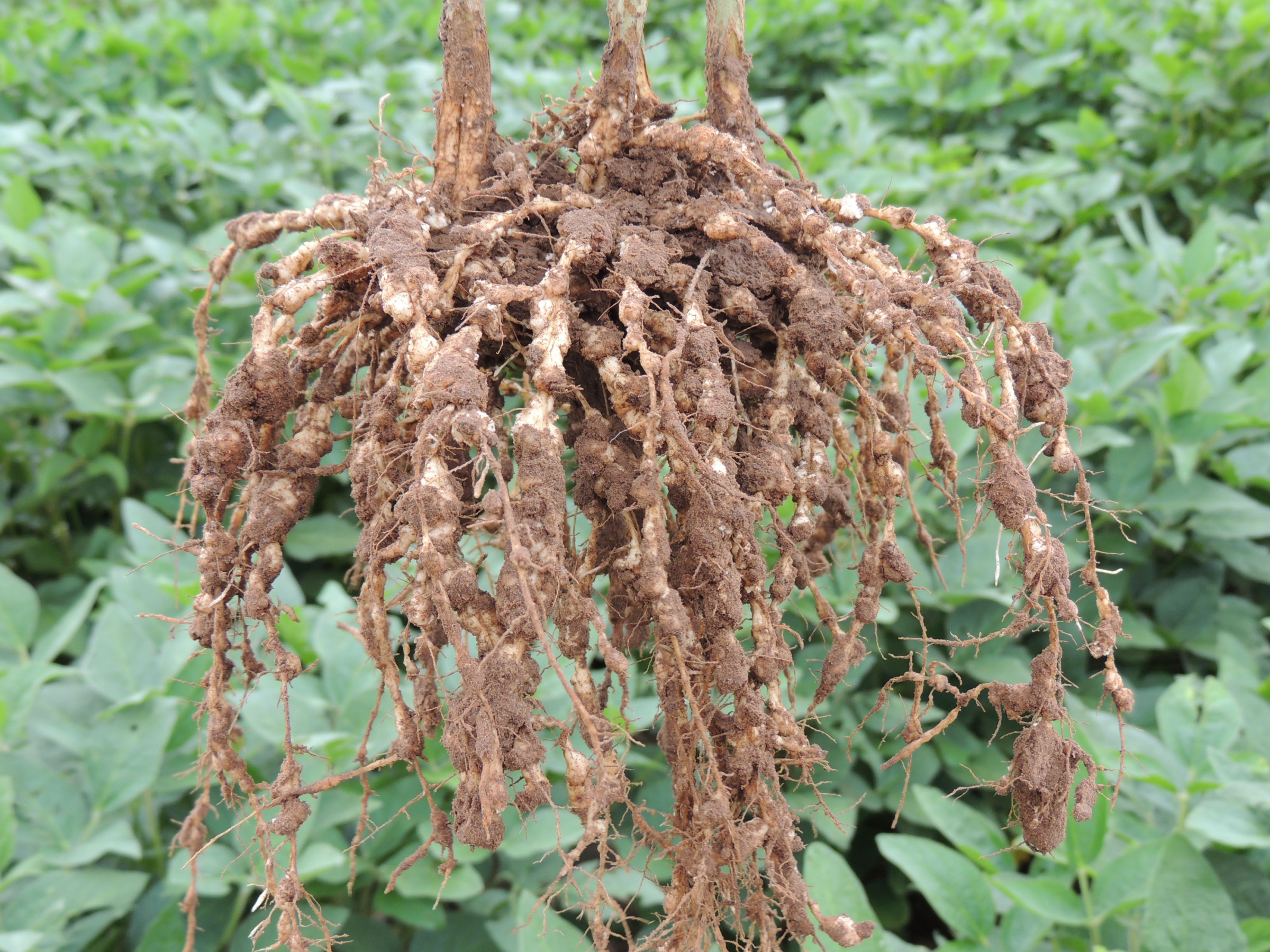 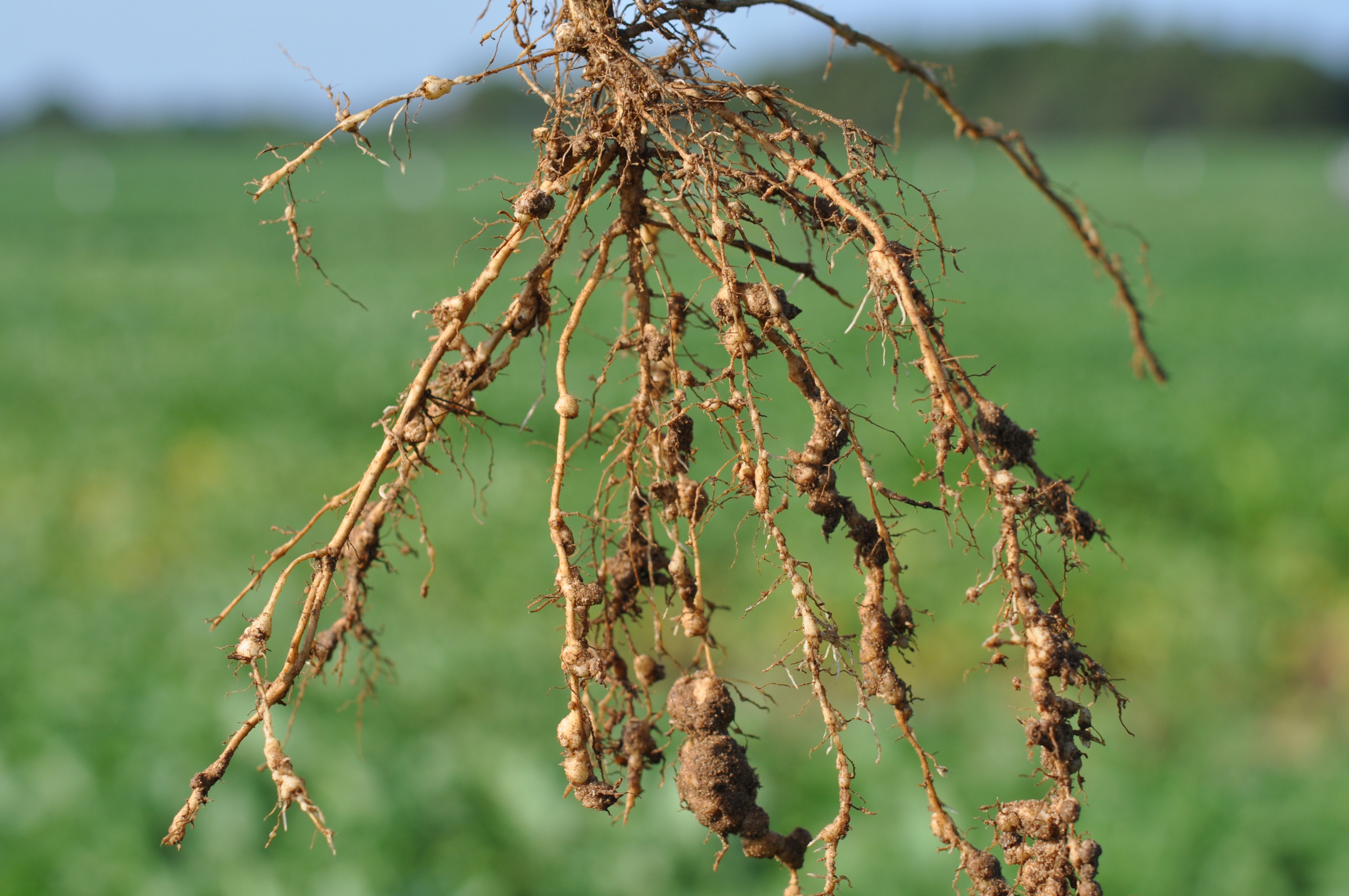 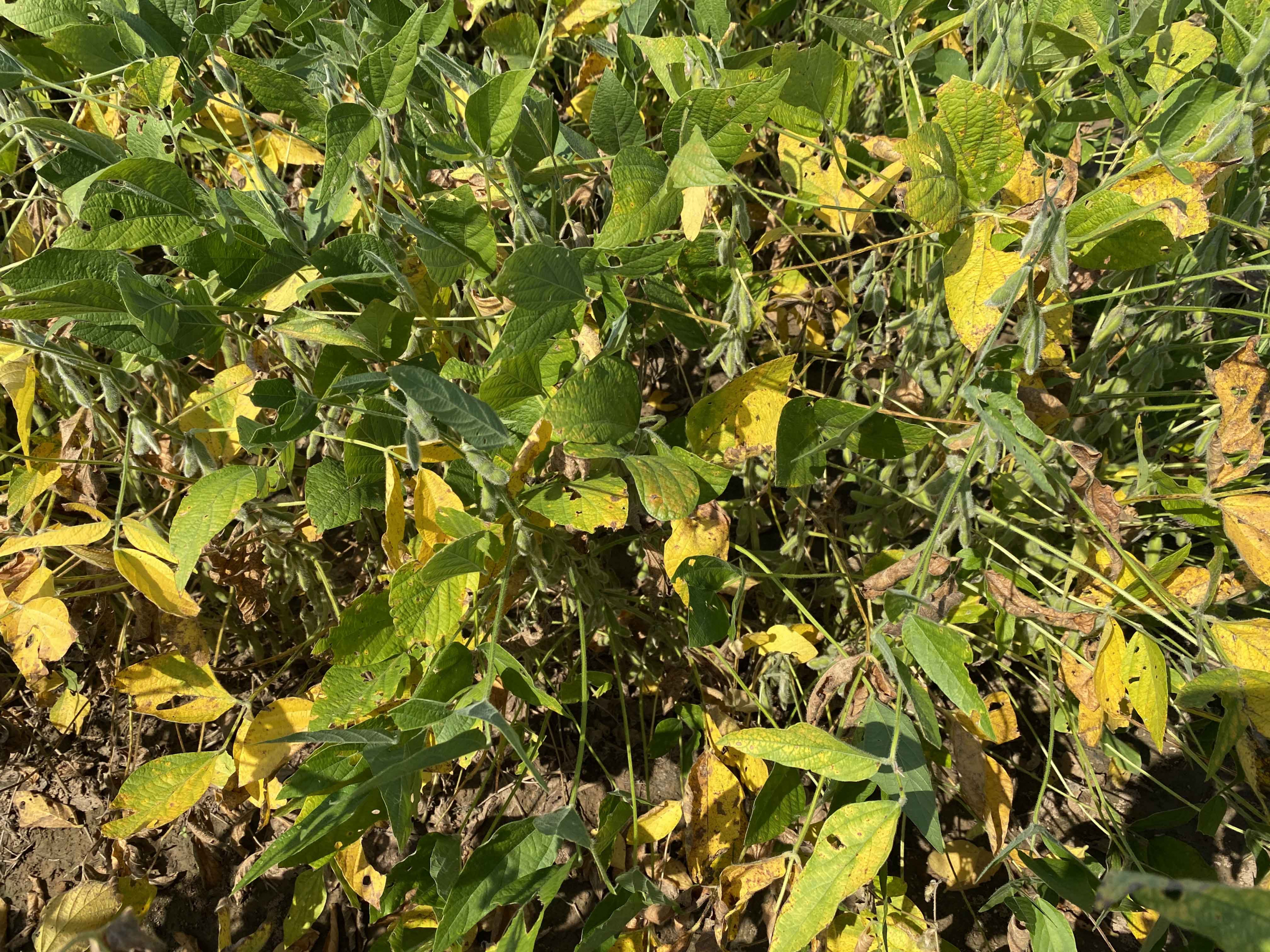 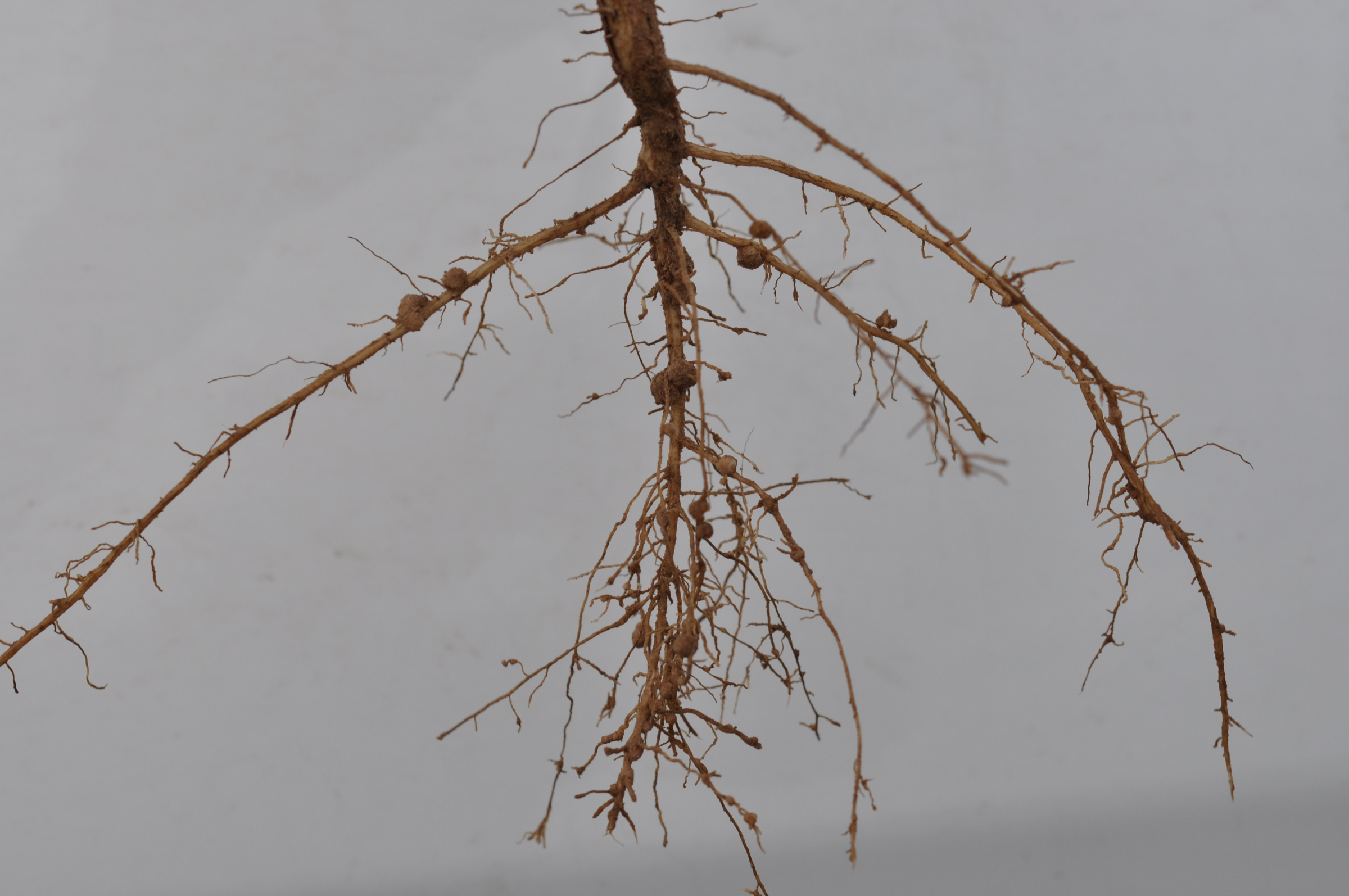