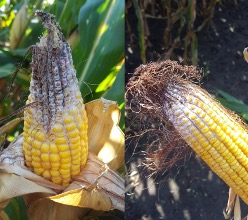 In 2018 and 2019, field trials using two brown midrib (BMR) silage corn hybrids were conducted at the Arlington Agricultural Research Station in Arlington, Wisconsin. The field trials were conducted to evaluate the effect of different foliar fungicide treatments (13 in 2018 and 11 in 2019; Table 1) and application timings on foliar disease and DON. Diseases such as northern corn leaf blight, tar spot, gray leaf spot, and southern rust were observed across these years and were rated in-season and at harvest. Additionally, freshly chopped silage samples were analyzed for quality, nutritional parameters, and DON levels. 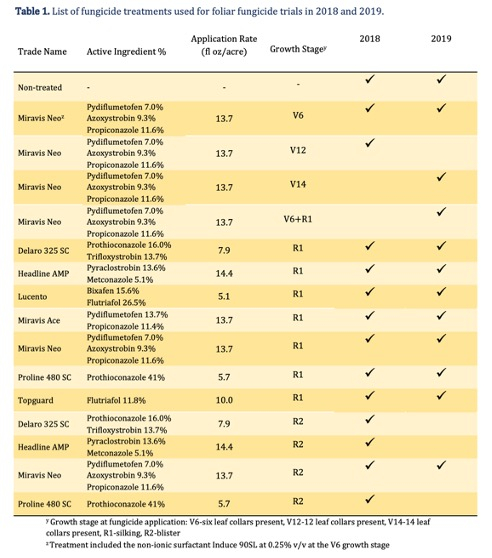 In both years a subset of field plots from the previously discussed foliar fungicide trials were used to investigate the colonization of F. graminearum and localization of DON within different parts of silage corn. These experiments are referred to as the partitioned sample trials and included fungicide treatments of Headline AMP (pyraclostrobin + metconazole) and Proline 480 SC (prothioconazole) applied at the R1 (silking) growth stage along with a non-treated control.

Both BMR hybrids were included in these experiments for a total of six treatment combinations. Gibberella ear rot and stalk rot ratings were made in-season and at harvest to examine the impact of the applied fungicides on disease severity. At harvest, stalk samples bearing ears were harvested and partitioned into stalk and ear (husks and shank attached) segments, which were processed and ground separately.  Samples were then analyzed by quantifying F. graminearum DNA quantities (using quantitative polymerase chain reaction i.e. qPCR) and DON concentrations (using enzyme-linked immunosorbent assay i.e. ELISA) in the partitioned segments.

Across the years and hybrids tested, there was little consistency in how fungicide treatments affected the measured yield parameters (dry matter yield, digestibility, moisture, and starch). Fungicide treatments reduced foliar disease levels (Tables 1, 2, 3, 4, 5). In the partitioned sample trials, F. graminearum and DON were detected in all samples. Ear rot and stalk rot severity were relatively high in 2018, with DON concentrations reaching 30 ppm, and lower in 2019, with DON concentrations <5ppm. Concentrations of DON were consistently greater in stalk samples compared to the ear samples in 2019, but in the elevated disease of 2018, there was greater variation of DON accumulation between stalks and ears. Quantities of F. graminearumDNA in ears and stalks were linked to corresponding DON levels in both stalks and ears, but DON levels were not always related. For example, high levels of DON in stalks did not necessarily mean that there were high levels of DON in ears, and vice versa (Figure 2). 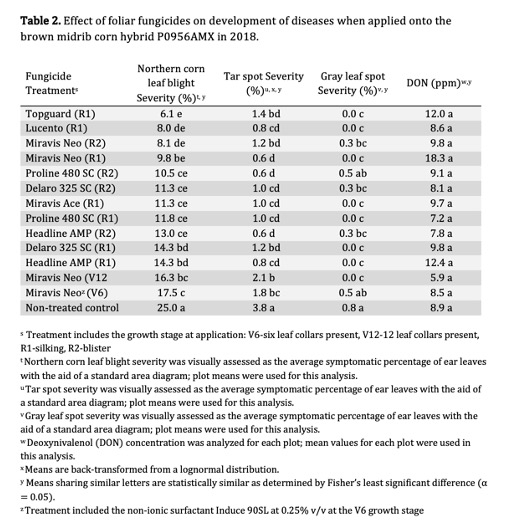 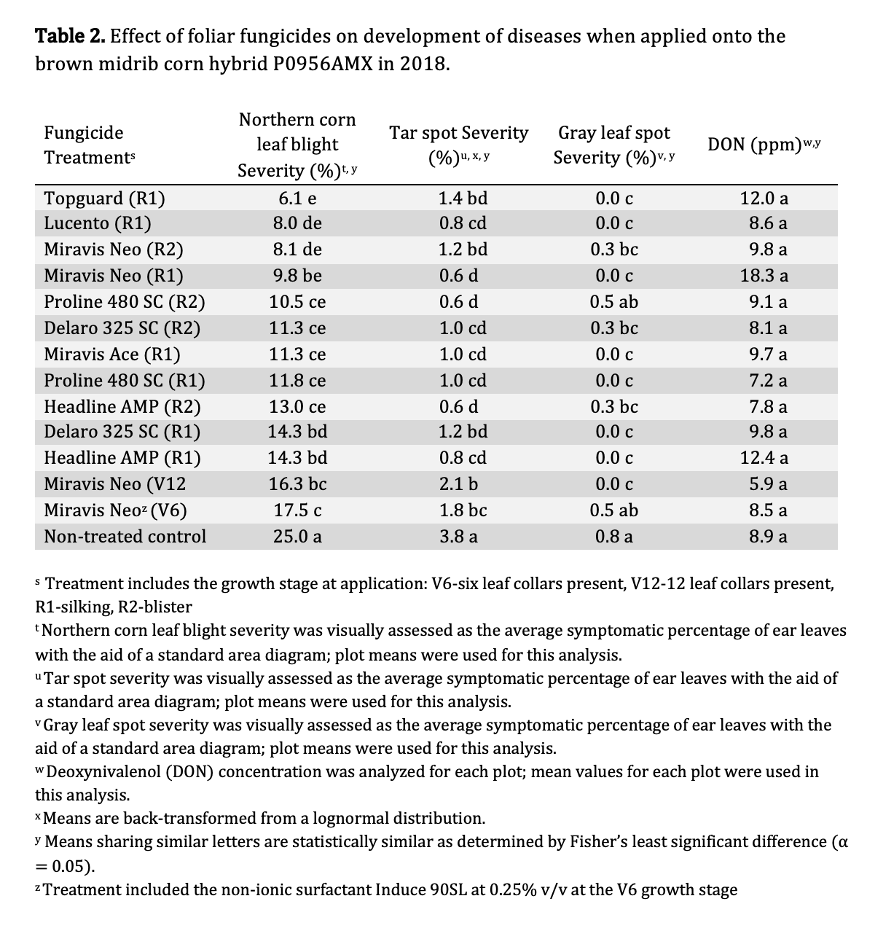 An Overview of Goss's Bacterial Wilt and Blight

An Overview of Frogeye Leaf Spot